TWANAS founders then held the 1979 hunger strike demonstrating the dire need for a Third World and Native American College. The demands:

The administration responded by granting tenure to one faculty member for the Feminist Studies Department and one for American Studies, but did not recognize the petition for a Third World and Native American College. According to Feminist Studies professor Bettina Aptheker, over 60 tenured professors petitioned to teach under the Third World and Native American College. This demand remains indiscernible to the University of California.

After few of the demands were granted, Armando Bravo and Dwight Chism, TWANAS’ first co-publishers, gathered TWANAC students and community contributors to build what would become the very first issue of the publication. Printing funds were provided by reallocating City on a Hill Press’ dormant “Multicultural Desk” budget to launch the first volumes of the publication.

Throughout TWANAS publication’s history, the collective found advertising was offensive and harmful to the written and illustrated work of underrepresented and silenced peoples and perspectives. The collective has agreed that advertising is an imperialist practice that is strategically used in the hegemonic discrimination of “marked” peoples. The publication will, however, print “announcements” for sister organizations of SOMeCA free of charge as a part of our mission.’ 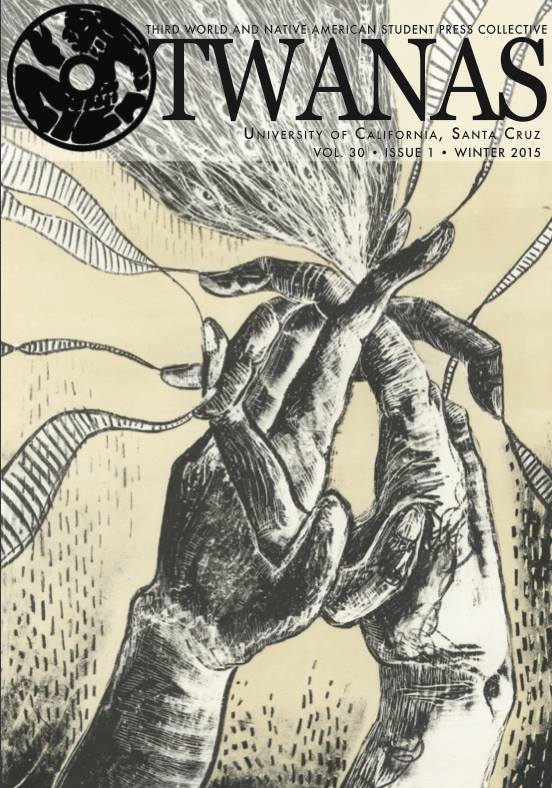 The Mission Statement has been altered according to changes in politically and academically recognized terminology. Since 2008, the collective has made considerable changes to terms and concepts that are no longer considered “politically correct,” as well as to give the publication additional freedoms in who can be a supporter of the movement and member of the organization. Lastly, the publication has made clear that TWANAS produces journalistic and activist work, and though it may not be in line with AP standards, it is salient and equally worthy of readership.

TWANAS has historically originated or worked hand in hand with the Ethnic Studies movements across the UCSC campus. In 2011, the Critical Race and Ethnic Studies (CRES) Movement reinstated the longtime struggle for an alternative academia by a large body of graduate and undergraduate students, some of whom were TWANAS members. But as UCSC’s Academic Senate and administrators have appropriated what we now call Ethnic Studies, many students of color and TWANAS members began to notice that what was being created did not provide for the student voice, much less the voice of students of color. Thus, our struggle continues.

After much consideration, TWANAS changed its name from Third World and Native American Student Press Collective to Communities of Color and Native American Student Press Collective in 2017. The reason for the change was to be more inclusive. TWANAS members has long discussions about what term could represent students of color on campus. Members contemplated many terms that could replace “Third World”, a phrase that felt outdated.  Communities of Color is a term that’s meant to be like a blank slate that students create and claim their identity and representation through. TWANAS itself was kept as the official acronym in respect of the original history and struggle that birthed it. Native American was also kept in the longer name in recognition of the land we stand on today in the United States and the oppression Native Americans students face.

TWANAS works to create an inclusive and diverse place. We expect the TWANAS community to be conscious about our personal multiple perspectives, motives, assumptions and thus our overall bias. To help ensure this, we strive to create an environment where members can feel comfortable speaking up when our diversity guidelines are not being followed. Our goal is to make our content as well as our meetings inclusive of issues surrounding race, gender, sexuality, and other identities. We aspire to be a space for expression, engagement, and learning.