The Letter to my Parents I’ll Never Send 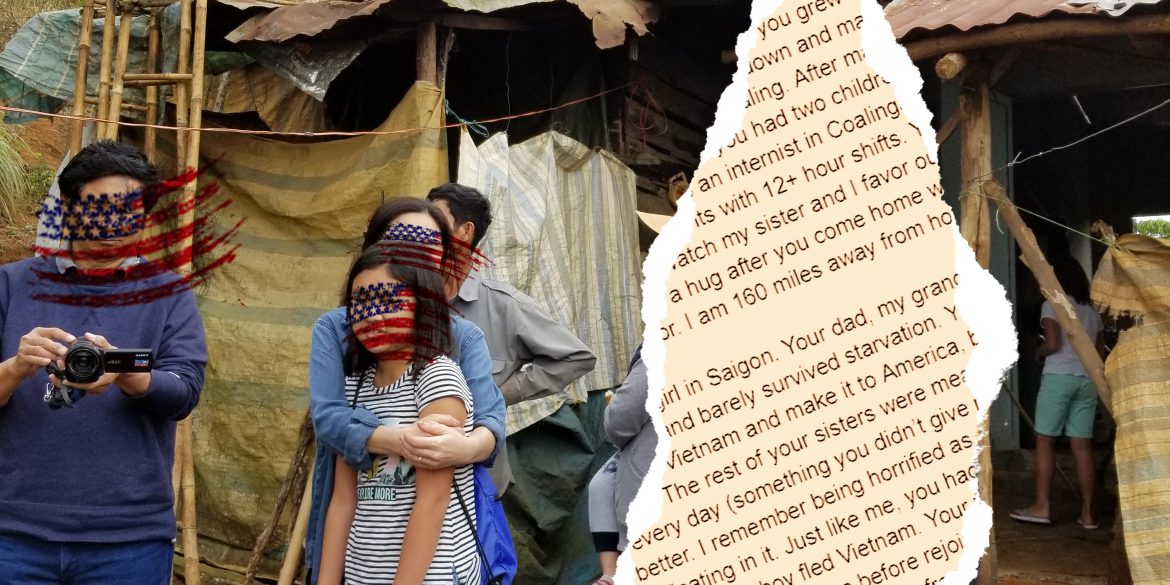 “Mom, Dad, your lives were hard and they still are. You have more experience than I have in my 18 years of life. You are my elders, and you carry wisdom and experience I will never obtain. Does this justify your current bigotry?”

Content Warning: This piece contains material about mental health with some mentions of suicide.

Dad, Mom—you’ve been through more than I could ever comprehend, and I’m still not sure I know the full story.

Dad, you grew up in the jungles of Vietnam on a coffee farm. You had to drop out of school during second grade to work the fields. As was common, you and your family lived a poor life (you’ve told me you only owned one set of clothes at age 20!). You could have settled for this life, but instead you studied incredibly hard, managed to join military school, and graduated as valedictorian of your class. You moved to Saigon to become a doctor in the Vietnamese military—and you even carried rank. As you learned to save people, you also learned to kill them. On the battlefield, your eardrums were blown out from the bombs. Following the war, you escaped to the Philippines, where you met my mom, and emigrated to America. You rebuilt your medical career from scratch in a country that didn’t accept you, receiving the best of education from USC as a post-graduate. Along the way, you grew distant from my mother and faced a series of heartbreaks before finally settling down and marrying her. Just like me, you grew suicidal over a past lover before finally healing. After marriage, you began treating inmates at Corcoran for their mental health, and you had two children: myself and my younger sister. And now, 18 years later… you work as an internist in a state hospital. In your first years there, you took many on-call nights with 12+ hour shifts. You had to miss the day-to-day growth of your children. You had to watch my sister and I favor our mom over you, and now you’re left asking an irritated 13-year-old for a hug after you come home from work, something that my sister insists she’s too big for. I am 160 miles away from home.

Mom, you were a city girl in Saigon. Your dad, my grandfather, was taken away to the concentration camps and barely survived starvation. Your brother was one of the first to successfully escape Vietnam and make it to America, but not before being attacked by Thai pirates on the way. The rest of your sisters were mean to you. You used to escape to your best friend’s house every day (something you didn’t give me the privilege of). School conditions weren’t much better. I remember being horrified as a kid when you told me that your drinking water had bugs floating in it. Just like me, you had your share of high school romances, but the war cut all short as each boy fled Vietnam. Your turn to escape came when you were 24, and you met my dad in the Philippines before rejoining your sisters in California. You attended UCLA, but soon afterwards dropped out from stress. Your job was as short-lived as your education: you were a dental assistant but became a stay-at-home mom after marrying my dad. You had god knows how many miscarriages—3? 4?—before me, and one between my younger sister and I. Who was there to comfort you? Your former best friend is lost to you in Canada now, and you have little to no friends in our town. Dad cheated on you when I was in elementary school, and you attempted suicide. Your side of the family has a history of mental illness that you’ve had to cope with your entire life, and this is something that I’ve also inherited from you. Your health problems don’t end there. The same year you attempted suicide, you also discovered your early stage of breast cancer, and had a mastectomy. As you age, your joints and back ache more, and you get frequent migraines. Still, you are a good housewife, and cook and do the laundry and clean the house. You have pain in your body. You have pain in your heart from watching me grow up and leave for college this year.

Mom, Dad, your lives were hard and they still are. You have more experience than I have in my 18 years of life. You are my elders, and you carry wisdom and experience I will never obtain.

Does this justify your current bigotry?

When I was little, I learned at school about the Jim Crow era and about Martin Luther King Jr. Dad, you said something to me at home one day—I can’t remember the exact words. Something about how those blacks (with a disgusted tone) are dangerous criminals, and how I need to avoid them. I doodled the word “prejudice” on a piece of paper over and over again as you droned on. You defended yourself: you were only telling the truth. I must have been as young as 7… I’m thankful the public education system got to me before you did; otherwise what would I be believing now, if you taught me that at such a susceptible age?

As I entered middle school, you and my mom started pressuring me to prepare for college and start thinking about my career. I grew up internalizing shame for teachers, engineers, psychologists… poor people who hardly made any money. I learned that my only path for success was through healthcare. With all this pressure, you taught me an unhealthy fixation on money that I still can’t shake today. Privately to me, you would critique how poor my friends’ parents were. Looking back now, I can’t understand how I didn’t adopt the classism you held.

“You two infused sexism and heteronormativity into my daily life. I grew up hearing how the male and female brains are structured differently; how the most successful people are always men, how women are naturally worse at math and science.”

Perhaps it was because I raised myself via friends and the Internet more than relying on you two. In adolescence, the mental health issues I’d inherited from Mom started manifesting, and I became codependent on my friend. I began self harming. I was suicidal. Mom, you didn’t help me. You threatened to off yourself if I ever did. You would enter my room at night and sleep on the floor so I never had privacy. I used my band class as an outlet, but after sophomore year, you got fed up with the amount of time it ate up. I’d be out of the house until 9 at night twice a week, and on weekends I left for competitions. It was too much for you, Mom. In the car to and from practices, you would berate me and yell at me for not focusing on my studies. You threatened to pull me out of band for my junior and senior years, and even now I still can’t remember how I managed to fight back and stay in band. My only purpose should have been to study to get into college, and earn a degree to make money. It was always about money. My grades slipped, and you told me no college would ever accept someone like me. I was worthless if I couldn’t make money. Not even our local community college would take a failure like me.

I realized I was transgender my junior year and tried to express myself. It was only then I realized how strictly I’d been raised with gender roles. I wasn’t allowed to wear “boy” clothing or cut my hair short. One of my friends was brave enough to come out as transgender, and you two misgendered him and called him a mistaken trend I was trying to follow. You said he was wrong. Mom, another Vietnamese boy I knew came out as gay, and you said that his parents had to learn to love him “despite” his sexuality. I tried to come out to you as asexual, thinking that it might negate your shame in my past relationships, but you chalked up my experiences to being side effects of my antidepressants, trying to wean me off the medicine so I could become “normal.” (Never mind that relationships don’t have to be inherently sexual, and yet you still drilled shame into me for being the only person in my generation of our extended family to date before college, let alone before obtaining financial security and a stable job.) According to you, my gender and sexuality were delusions from the medicine that kept me from killing myself. You two infused sexism and heteronormativity into my daily life. I grew up hearing how the male and female brains are structured differently; how the most successful people are always men, how women are naturally worse at math and science. How women were more emotional, and thus get into more dangerous situations due to a lack of judgement (Mom, you’re a woman—how could you say that?). How women are inherently bad drivers (your experience isn’t universal!). I was putting myself into a man’s world by attempting to major in computer engineering… but of course, by now I’d proved myself to be too dumb to become a doctor, like you’d originally planned.

“College is a breath of fresh air. I’m learning so much more now than I could have ever learned in our isolated Republican hometown.”

This has been my first year as a college student. Dad, before I left, you warned me about the hardships I’ll have to learn to face. Now that I’m 18, you feel I’m finally old enough to learn the cold truths of this world. You told me to beware working with blacks, who are lazy and don’t ever do their share of the work. Beware living with Filipinos, who are dirty and like to make a mess of their living spaces. Beware the Mexicans who pay nothing to go to college and live off welfare. When you were in college, you said, you were discriminated against by the Jews. You said they rule elite society and discriminate against us Asians. Dad, you quoted Nixon’s claim that the Jews ran the IRS at the time, the greedy pigs. But you’re not racist, you claim—you’re just stating the truth.

College is a breath of fresh air. I’m learning so much more now than I could have ever learned in our isolated Republican hometown. How could you two have taught me that America saved South Vietnam from the communists? How could you have hidden Vietnam’s history of French colonialism from me? After 18 years of ignorance, when I finally learned about the Agent Orange that America corrupted us with, a chemical that never fully left and still perverses infants to develop birth defects… how could you brush that off when I asked about it, and claim that the Agent Orange “specimens” were faked by the communists? America’s war crimes, the napalm, the Mỹ Lai massacre… and you raised me to believe that America was our savior who rescued us.

Mom, Dad, you lived through a war in a third-world country. You’ve faced poverty and starvation and death. You’re the lost souls, the valued immigrants that this country needs to respect.

But despite everything you’ve faced, your lives don’t excuse your shitty bigotry.