Does Media Influence Perception of Identities?

In early 2011, my friend and I were sitting in a parked car in a driveway drinking a bottle of whisky. We were listening to music, talking and reminiscing. Between conversation and songs playing, I turned on the car engine and drove around the city. Before I knew it, I saw red and blue lights flashing in my rearview mirror. “Damn” I said, “I messed up”. I halted the car. A police officer walked to my window. “One of your lights is out.” He observed me. “I want you to blow on this breathalyzer.” I blew into the gadget and he viewed it. “I’m placing you under arrest for D.U.I”. I complied with his request, stepped out of the vehicle and placed my hands behind my back. He squeezed the cuffs on my wrists and placed me in his squad car. Inside the car I fell asleep. Upon entering the station the officer pulled me inside a room where he and others began kicking and punching me until I blacked out. I woke up the next morning. “What the hell, did this really happen?” I stood up and peeked through the door window frame. My friend was resting his head on his hands sitting down on a chair. I turn to observe the cell and see a bathroom and a bench. I sit down. “Fuck! I could have got him killed”. I felt guilty for having decided to drive and put him through this. In that moment I decided never to drink alcohol again. As I was sitting down thinking, a police officer unbolted the door and walked in with five officers behind him. “Immigration is coming to get you right now”, he said.  I felt anger stir up inside me. “What, you feel superior?” I replied. His face flushed red with anger. “Shut the fuck up”, he said, then locked the door and vanished.

Eventually I was released and began walking down the street, puzzled and in disbelief of the incident; being assaulted and threatened with deportation. I wondered how many underrepresented people in vulnerable positions were abused by police officers like him. When I had time to reflect, I thought about what his threat meant. His anger stemmed from his thought or assumption that I was an invader, an undocumented immigrant. I became a symbol of an identity. There was attached beliefs and attitudes towards his concept of who he thought I represented. He assumed I was outside of the law and at the same time defenseless. Threatening to deport me and attacking me indicates that he thought I had no one, no justice system to turn to or navigate.

While I regret my actions and have deep sentiments for people whose family are victims to drunk driving accidents, I still wonder about the police officer’s brutality. For, though I committed a crime I am first and foremost a human. I also think about people who are treated unjustly due to authority figures’ emotional attachment to a distorted image or idea that they think represents a person; a presumed identity that dictates how they treat them. That moment makes me understand the forms of racial hierarchy, and how divisions are created by predetermined and constructed identities. Hence, what ticked the police officer off was the definition he had of me. His attitude reflects that people are being influenced into categorizing and defining who people are in order to “understand” them, where to place them and how to treat them. The meaning behind the symbol I represent is one that I would argue has been fabricated and spread throughout society by a medium that reaches the general public such as the media, where there are images created throughout society intended to condense people’s identities. Placing a label on someone dehumanizes them, for they are not seen as they truly are but through a perceived notion which affects whether a person is treated with human integrity.

I want to consider why there are prejudices about racialized groups, specifically misrepresented people and how misconceptions are created. How stereotypes and perceived identities become formed in people’s consciousness. But also how viewing others through discriminatory identities manifest into harassment, police brutality, alienation, and social divisions.

I hold the argument that to construct a worldview is a natural and innate part of being human. People seek to understand the meaning of things, concepts, actions, symbols, words, and occurrences. As a result, humans are “meaning makers”—giving significance to experiences (Garland and Fredrickson, 38). By making sense of events and giving meaning to the world, they create beliefs about what is considered  “reality” and are able to interact with their surroundings. For example, people are not born knowing concepts but rather they learn them. Therefore, they construct how they see reality based on the meanings they have been taught. However, if people’s reality is oriented by meanings, then the definitions of concepts and what people hold as “truth” is subject to contextual transformation. For instance, an illustration of ‘meaning-making’, is that people in the old ages thought Earth was the center of the universe and this idea affected their perception of “reality”. However, it was discovered that that statement was false, and in effect, how they made sense of existence changed. In short, what people consider “truth” is liable to transformation and is not set in stone.

Knowing that meanings are susceptible to change, the media takes advantage of this fluctuation to allow viewers to create prejudice notions of different racial groups. One of the main ways media attempts to engage viewers is by creating an emotional association with an image. Through images of racialized groups, they adopt an attitude, which creates a constellation of characteristics based on a single representation; this increases the discrimination a racialized group encounters.   The construction of identities of racialized groups is done so that the viewer knows how to identify with an individual before actually getting to know them. Thus, people are being manipulated by pseudo-realities, and pseudo-identities, targeted at underrepresented groups, which the public mass takes to be real identities. The general public constructs the belief that those identities are genuine representations of a racialized group as a whole.

Using this framework allows us to understand that being exposed to mediums such as television, radio, school, and/or religion, will have an effect and influence our meaning-making decisions. People are vulnerable to any form of influence from mediums that reach them.  The majority of discourses influence people’s perceptions so as to create racial divisions and form an identity to represent a people. This is done so in subtle, yet discrete forms but upon analysis reveal a structure and characterization of racist ideology. For example, in the late night news  there are  constantly  showings of  underrepresented groups that have committed crimes, which misconstrue the image of who a racial group is. Once in my high school class, we were discussing an incident that aired on the news about a group of Mexican-Americans who assaulted a person. A student speaking about the incident and indirectly about Mexicans said, “They’ll stab you.” I was puzzled. I didn’t know any person in my community or family who had stabbed anybody. The only way he could have built up such an image is through associating criminal behavior with underrepresented people. Such a display of images in the media pushes the idea that if one person from a group acts in criminal ways, then that behavior is an attribution of all people from such a targeted group. In effect, this constructs an identity of stereotypes that are associated with underrepresented people.

In a study conducted by the National Hispanic Media Coalition, an online survey was given to 3,000 non-Latino Americans. In this study, it was discovered that media portrayals about Latinos influenced their perception and beliefs held towards Latinos. The participants were asked to watch videos, listen to clips and read articles where one group viewed positive and the other negative portrayals. Thereafter they registered a questionnaire. The questions ranged from: “are Latinos less educated?” “do they use welfare assistance?”, “are they oriented with culture of crime or gangs?”, “do they take jobs away from Americans?”, or “are they undocumented?” Groups who saw positive representations agreed at lower rates. Whereas groups that viewed negative depictions agreed with the questionnaires at higher percentages. The survey concluded that media portrayals of Latinos affect the opinion of the recipients and in effect sway the stereotypical opinion of the viewer.

When I read this study it confirmed my belief that the media has an influence on how people view underrepresented groups. Thus, people are conditioned to think that the images depicted are true and stable representations of marginalized individuals, but rather these associations to an identity are being inserted from an outside force such as the news. In other words, I am more confident in asserting that the meanings behind concepts utilized to  “understand” people are vulnerable to media manipulation, rather than being based on ground or solid facts. The formation of identities through media portrayal controls how humans view others and the world. That is, what people call reality is actually an accumulation of skewed images.  The consequence of  viewing others through false representations is that it affects how people are treated and are not seen as authentic identities.

While this study highlights how people’s understanding of underrepresented groups are swayed by media depictions, it is important to note the umbrella term used even within this study; Latino as a nationality includes multiple races, but using one label gives the misconception that the study is speaking about one, and particularly, the same identity. For example, it can be argued that most of the participants generally thought of the term representative solely of a, more or less, similar identity. Whereas there are different Latino races and identities.

To attribute someone as violent, gang oriented, or undocumented immigrant is to assume that racialized groups have fixed identities. Holding an image or umbrella term ignores the complexity of people’s experiences and identities. When people are viewed through a fixed identity it does not allow the viewer to question the causes of the other’s situation, or circumstances, but rather to blame based on the surface level of what they see. It creates a superficial dynamic where people think things could be solved if a group would act other wise. That is, it does not explain or show the factors that play out in people’s lives. As cliché as it sounds, when one believes a narrative about a people it doesn’t allow a person to understand another’s humanity or their experience. Being persuaded to believe this myth makes it easier for people to stereotype, harass, target, brutalize, and seclude others in a grander scale.

After learning that media influences people’s meaning-making perception I became aware that repeated images about underrepresented groups become greater than constructed identities. The symbolization of people translates into events such as police brutality, alienation and political practices. I became concerned that despite racism already existing , media manipulation could inflate into something greater. I would like people to remember that behind a label there is a human experience. Also, to be aware of how meaning making is taking place throughout society and to be in control of one’s perceptual awareness. A label does not decipher a people’s authentic experience, political relations, and factors that play out within societies. 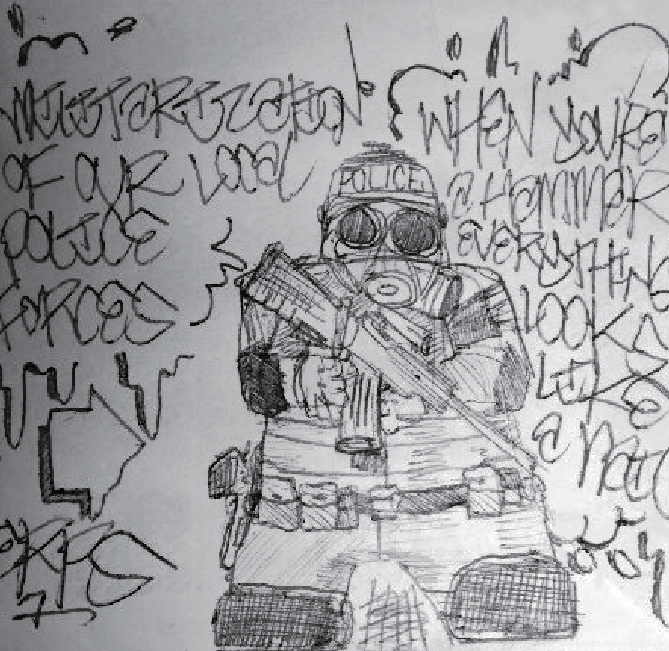