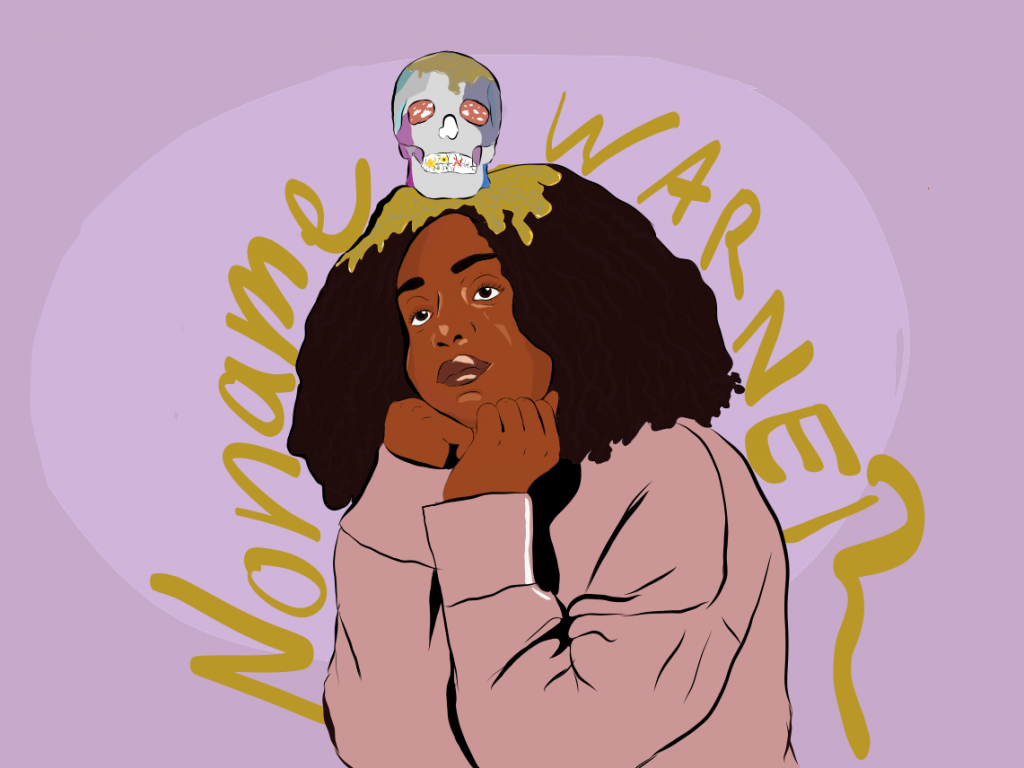 Communities of Color Coloring is a series that talks about to artists of color.

Telefone is like dancing in soul-filled rain, while the sun is shining warmly on your skin.

I initially chose Noname—actual name Fatimah Nyeema Warner—as the first for this series because her songs are captivating. Specifically, her 2016 hip-hop album Telefone, with its jazzy instrumentals and melancholic poetic diction. Telefone is like dancing in soul-filled rain, while the sun is shining warmly on your skin. It’s smiling big while crying.

In my quest to learn more about Warner and her music, I found that she’s a pretty cool person. The name she gave herself, for example, Noname. What is that about? Apparently, it’s Warner’s way of rejecting labels. It allows her a creative blank canvas to be whomever she wants. Noname can be anyone. Noname is a rapper, a poet, a reader, a writer.

Warner seems to be part of the wave of artists like Milo and Chance the Rapper, who are quite literally labelless; they aren’t signed to record labels. To Noname, it’s not about fame. In fact, you might have first heard Noname on Chance the Rapper’s track Lost back in 2013. But instead of releasing music amidst the song’s major popularity, she took three years to release Telefone. And as a self-releaser, it might be quite sometime before Noname releases a new album, and when she does, it will be out of the blue just like Telefone.

*Noname changed her name from Noname gypsy because she learned it was an offensive term for Romanian people.*

Telefone talks about some pretty heavy stuff from abortion to death to drugs, but it does so in a whimsical and playful tone. To me, this album is about standing strong even when things are bad, not because you want to, but because sometimes you have to. No matter what your obstacles are, you have some control over how you choose to face them.

So Here are Some of My Favorites:

Bye Bye Baby: That introduction though. The rap is fast with a soft delivery. Noname made this song about abortion. It’s not something people typically talk about and she does so without shame, touching upon how she’s not ready to be a mother. The song is sweet with a light piano as she says goodbye. “Oh you know I hate Goodbyes.” Especially because the instrumentals are so light, you get a sense of healing, not shame.

Yesterday: I like the drums. They add a nice rhythm with her lyrics and smooth rapping. The very uplifting chorus and piano make this a bittersweet sunny song. The piano is whimsical and there’s a choir element, which adds a sense of community, family, and closeness.

Casket Pretty: This has really cool instrumentals; I like the piano and trumpet-like sound. This song talks about police brutality and has a lot of emotion in it. “Casket Pretty” is a metaphor in of itself and is such a creative way to express the issue.

All I Need (ft. Xavier Omär) : The introduction and lyrics like, “The reefer got me like whoa slow down. If it’s not how I want it. It’s just how I need it.” I just enjoy this song.

Freedom (Interlude): I love the beginning: “I thought I was gonna write a rap.” Her voice takes dominance in this piece, making it feel like an open mic performance. It’s different from the other songs in that sense, but I like how it shows off her writing skills. At the end there is a sample of an interview of Nina Simone where she says what freedom is to her. Pretty powerful.