Reverence and Remembrance of Indigenous Peoples

UC Santa Cruz is a university that sits pretty among the annual rankings for most beautiful college campuses in the world. It is because the entire campus occupies the ancestral homeland once inhabited by the Ohlone peoples that we see these top rankings.

The Ohlone were once around 10,000 strong, with 600 in the greater Santa Cruz area alone.¹ Santa Cruz was home to the Awaswas-speaking Uypi tribe. Their name for the coastside haven was “Aulinta,”  meaning “place of the red abalone.”

When the Spanish explorers arrived in the 18th and 19th centuries, so did the systematic conversions, exploitation, abuse, slavery and murder of Indigenous peoples and their tribes. In September 1791, Mission Santa Cruz was founded and built. Both Indigenous men and women were subject to pain and abuse at the hands of merciless Franciscan padres.² Indigenous peoples were forced to convert to Christianity because they were supposedly “savage” and needed saving.

Spanish explorers called the Indigenous peoples they came upon, “Costeños,” or coastal people. This was changed to the term, “Costanoans.” In the 1960s and 70s, “Ohlone” became the widely accepted term for the Indigenous tribes.

The term Ohlone is something of a misnomer; it is a blanket term for the many diverse Indigenous groups that resided from the San Francisco to Monterey and Big Sur regions.

The mass extermination and attempted erasure of Indigenous peoples was unsuccessful in stomping out their cultures and traditions. Although still marginalized and amends never made in their favor, Indigenous peoples showed how vibrant and alive their deeply sacred traditions are on a sweltering, albeit beautiful, Saturday afternoon in Santa Cruz. 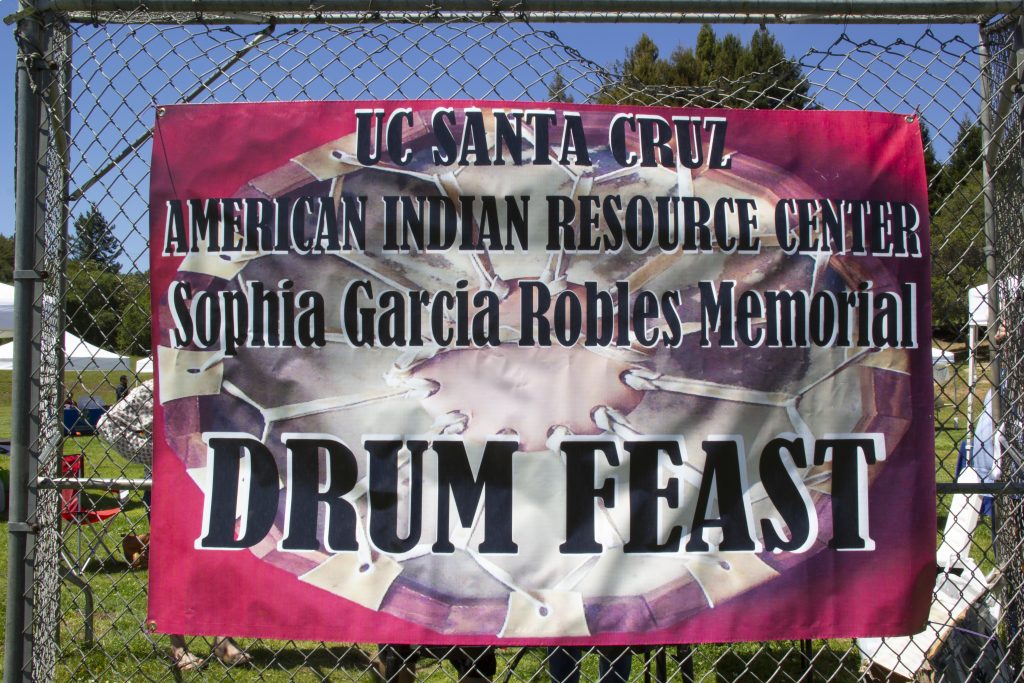 On April 21, the calming scent of sage drifted across the field and though the crowd was but a growing few, the quiet reverence of the ceremony carried a inexplicably sacrosanct presence that filled the space.

This was the opening blessing ceremony for the 7th Annual UC Santa Cruz Sophía García-Robles Memorial Drum Feast, held at the Family Student Housing field. When the ocean breeze made its way up to the grassy field, its cooling touch provided an additional blessing.

The event was hosted by UCSC’s American Indian Resource Center (AIRC) and is held annually to commemorate the life and work of Sophía García-Robles, a former UCSC advisor who provided guidance to many Latinx and Chicanx students. The feast supports a community that is often forgotten about, but is an integral part of the lands that support UCSC and the greater Santa Cruz area.

AIRC director Dr. Rebecca Hernandez Rosser, has led coordination of the Drum Feast for the past four years. One of the jobs of the AIRC is to educate people about the current Indigenous populations residing in Santa Cruz and she believes the Drum Feast helps accomplish this.

“It allows for the campus community to see that there are Indigenous people, both that are students and that are living in the area, ” said Dr. Hernandez Rosser, who identifies as Mexican American and Mescalero Apache. “It’s nice to have that visibility for a day.”

According to the 2017 U.S. Census, the current American Indian population makes up 1.8% of the population in Santa Cruz County.

Because the land was blessed during the Drum Feast opening ceremony, people were not allowed to simply traipse over the land unless invited to. Instead, people could walk the periphery of the Drum Feast to get to the food and drink vendors, organizational booths and seating area.

He says that like other Americans, he is patriotic to a certain degree but has mixed feelings when he is assigned another flag – the American flag – to hold during ceremonies. The flag reminds him of a history marked with the widespread genocide and death of Indigenous peoples.

“For me,” Holquin says, “the red stripes are like the blood of the Native people that got eradicated, starved to death or died of a disease.”

Holquin knows that American Indian stereotypes are still very real today. He listed them out without hesitancy, and with a tone that sounded like he has heard them all one too many times. But he wants everyone to know that Indigenous peoples are more than what they are sometimes reduced to.

“We are a multicultural society,” said Holquin. “What many folks consider primitive or backwards cultures, have something to offer.”

The Heart of the Drum Feast

By mid-afternoon, the Drum Feast crowd had blossomed to 110 attendees. The aroma of sage was replaced with the mouth-watering smell of crispy fry bread lavished with strawberries, honey and powdered sugar.

Groups that were curated to present and perform were People of the Islands, Fremont Drum Group, Grupo Folklórico Los Mejicas, Senderos and the White Hawk Aztec Dancers. Each of the groups showcased traditional songs and/or dances that demonstrated their devotion and ties to their ancestors, cultures and lands.

“There’s a tremendous reverence when people are performing,” said AIRC director Dr. Hernandez Rosser. “Especially dances like the Aztec dance group where’s it’s really rooted in relearning about their own histories and celebrations of being connected to that culture.”

One group who is familiar with the Drum Feast is the Fremont Drum Group, a community drum group who has presented at UCSC for the past two years. Sitting around their Gathering Drum, they sang six songs including Buffalo Song, Happy Song and Grass Dance.

The Fremont Drum Group is led by Drum Keeper Christina Cruz and sees around 15 students – aged from kindergarten through 12th grade – regularly at practices. Despite being Drum Keeper, Cruz herself does not cast a vote on the group’s activities. Cruz stated that just about everything is decided by the youth and it is because of them that she holds her title.

“I was taught in my upbringing within my nation that we are as our community sees as,” said Cruz, who was brought up Apache and is of the Lenape and Chumash tribal nations. “Because of that, the students recognizing my work and what I bring to the drum is what makes me a Drum Keeper.”

A majority of the students are from the Fremont Unified School District but some come from as far as Oakland. The reason behind this, Cruz said, is that although there are drums at other organizations, not all of them allow girls.

“What I was brought up understanding is that the heartbeat of our mother of the Earth is through the drum,” said Cruz. “And one of the things that has happened over time is that men have said, ‘You shouldn’t be beating the heartbeat, it should be the men doing it.’”

As a member of Thoz Womenz, an all-women Native drum group created in Alturas, Cruz personally experiences this oppressive masculinity, which some individual drum groups have adopted because of influence from Western patriarchy. She said experiencing this mindset with the youth group is a rarer occurrence mainly because people tend to be kinder to youth. Still, in the past there have been some young boys who have come to their events and said that they will not stand with them because there are girls at the drum.

“As women, we are the life-givers or water-carriers and because of that we carry the heartbeat with us,” Cruz said. “The newborn within us hears our heartbeat and so when we sit at the drum and we drum, we’re drumming the heartbeat of the mother. And what is more natural than a woman to do that?”

Although this issue could easily rile anger in anyone who is so devoted to their craft, Cruz knows it is far more important to share the information they have about drumming along with the fact that there are such existing differences between First Nations.

While Cruz respects teachings from others’ nations, just as importantly, she aims to exchange the teachings she has learned with others.

“It doesn’t help to scold people or to hurt their spirits,” said Cruz. “It’s a balance between educating people and keeping the cohesiveness of our drum as well.”

True to her words, Cruz sought to make it clear that Native drumming is called “presentations,” as opposed to “performances.” This is because Native drum groups sing for their community with the intent of healing.

Cruz emphasized the need for those who attend Native social events to be respectful at all times, whether it be for something as seemingly harmless as asking a question, receiving permission to record and take photos or not stealing any of the songs presented. Often times, drum songs are copyrighted and it is customary to bring gifts or payment to drum groups in formal exchange for permission to use any of their songs.

Reverence and remembrance of Indigenous peoples and their cultures came to be at the Drum Feast, where the community was able to observe and participate in an intimate space under the same sun and sky.

“Often times, there’s little opportunity to embrace yourself so it’s nice to have designated events where you can feel comfortable and more at home,” said second-year marine biology student Julie Gomez, who was a Drum Feast volunteer and Hermanas Unidas member. “Our school tries to be more inclusive and diverse, but sometimes you feel isolated in a way.”

Volunteers from Hermanas Unidas, a Chicana/Latina organization, and interns from both AIRC and People of Color Sustainability Collective (POCSC), an environmentally-minded organization that supports communities of color, assisted with tasks like welcoming guests and encouraging people to dispose their trash sustainably.

“I think that with things like Drum Feast, going back to where we started and learning Indigenous and traditional roots of culture is really important in sustainability,” said Utsumi.

Utsumi sees how within the modern field of sustainability, there are trends like using pricey Hydro Flask water bottles and wearing the popular outdoor brand Patagonia, but she believes that this is not a viable and accessible option for most people. Utsumi decided to get involved with POCSC because she was looking for a way to practice impactful sustainability and from there, learned how the original caretakers of the land were eradicated from history.

“Indigenous and American Indian history is so erased,” Utsumi said. “As somebody with a lot of privilege, I think it’s a duty to learn more about those kinds of issues. It’s just something I felt the need to do to be a better person.”

This past fall, the count was at 0.8% of undergraduates, which is 147 American Indian students out of 17,577 total students. The amount of American Indian graduate students has also dropped to 1% of the graduate population.

AIRC intern Margherita Vargas, a second-year history and politics student, is a tribal member of the Hopland Band of Pomo Indians. She revealed that it is very difficult to find people with similar backgrounds as herself. She saw the Drum Feast as a way for the community and others who are interested in American Indian culture to come together.

“For UC Santa Cruz in particular, I think it’s really important to build awareness about native visibility on campus,” Vargas said. “We feel like this event really highlights students who need that sense of community.”

Attending events like Drum Feast marks the beginning of the path towards better awareness and understanding of America’s, or as Fremont Drum Group Drum Keeper Christina Cruz knows it as – Turtle Island’s buried past.

What must happen next are the conversations people have in spaces like the Drum Feast. Delanie Medina, first-year politics and film and digital media studies student, also volunteered at Drum Feast with Hermanas Unidas. Although Medina understands having conversations about Indigenous history is and will be uncomfortable, she pointed to respectful interactions as a way to promote dialogue and suggested a word to the wise.

“Just listen as much as you can and try to respect everyone,” Medina said. “As long as that’s happening and people are open to the conversation, then it’ll be easier.”